Having spent some time in the shed, its only right and proper that I spend some time out on the trails. So far I’ve been out for 2 local rides and 5 rides up in the Lakes on the Crafty, which gives a good early impression of where things are going and what tweak things might need. This is all on 29″ wheels. b+ later, proper wheels first.

First up, this bike is long. No, scratch that, its not long, its looooong. My old Nukeproof Mega AM (XL) had a 460mm reach, the Crafty (in XL) has a 530mm reach. Its initially quite weird, but once you actually start riding its a bike, which is what it should be. The most marked thing on the first outing was how uncomfortable the saddle is. Saddles are a personal thing, your arse is not the same as mine (you lucky thing) so you might like it, but its not for me. I switched to my old saddle after 2 rides and my arse is most thankful. 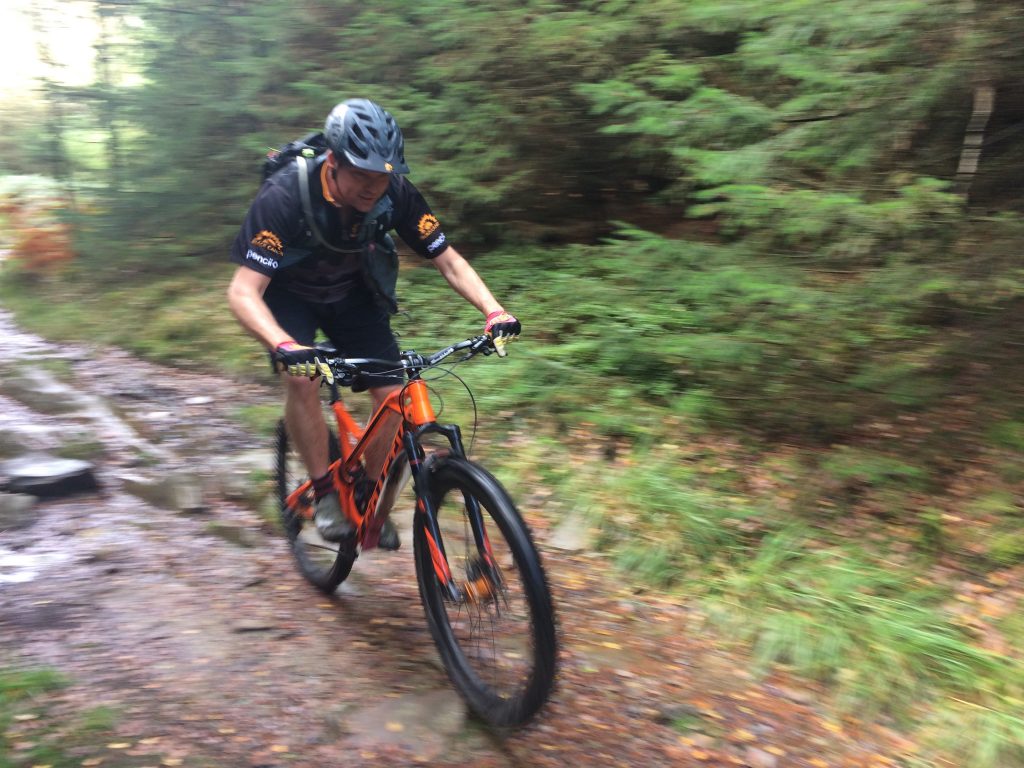 First wet ride out in the Lakes my sticky velcro chainstay protector came off and highlighted the amount of chain slap you get with the stock 30T ring. The knuckle of the chainstay, right by the ring, gets slapped silly when its rocky (even with a clutch mech) and that not to bad looking paint has already chipped off. On that same paint front, the slightly tight rear tyre clearance on the chain stay bridge has already lead to pain removal from a rock that the tyre spun round. Sadly no Invisiframe where the rock hit.

Riding in my local woods, where its fairly tight and not all that fast, the stock geometry feels good. The BB is a touch higher than stock (with 650b+) at 346mm and the seat and head angles are true to the book at 75 and 68.5deg respectively. Turning feels easier than my hardtail (a 29er with a 65.5deg head angle) and the length doesn’t seem to feel weird. The 30mm stem does make for a different feel in the steering to my normal 50mm but its not bad in any way, just different. Rolling steep drop ins the frontal length means you are so far behind the front axle that it feels like you couldn’t go over the front. Only once have I not made it round a tight turn, but certainly on the slower stuff you do have to drop the front end over to get it to turn, alpine style switchbacks are going to be interesting!

Up in the Lakes the terrain is much faster and rockier and some quirks started to come out. At speed, especially in rocks, the steeper head angle starts to get a bit twitchy, but its the rear end that felt most odd. The rear is the most flexible rear I’ve ever ridden, bar the original Orange Five. When riding along on a fire road, bigger gravel and small rocks cause the rear wheel to step sideways around them, rather than rolling over. Its an un-nerving feeling that had me double checking all the bolts on more than one occasion during the ride. 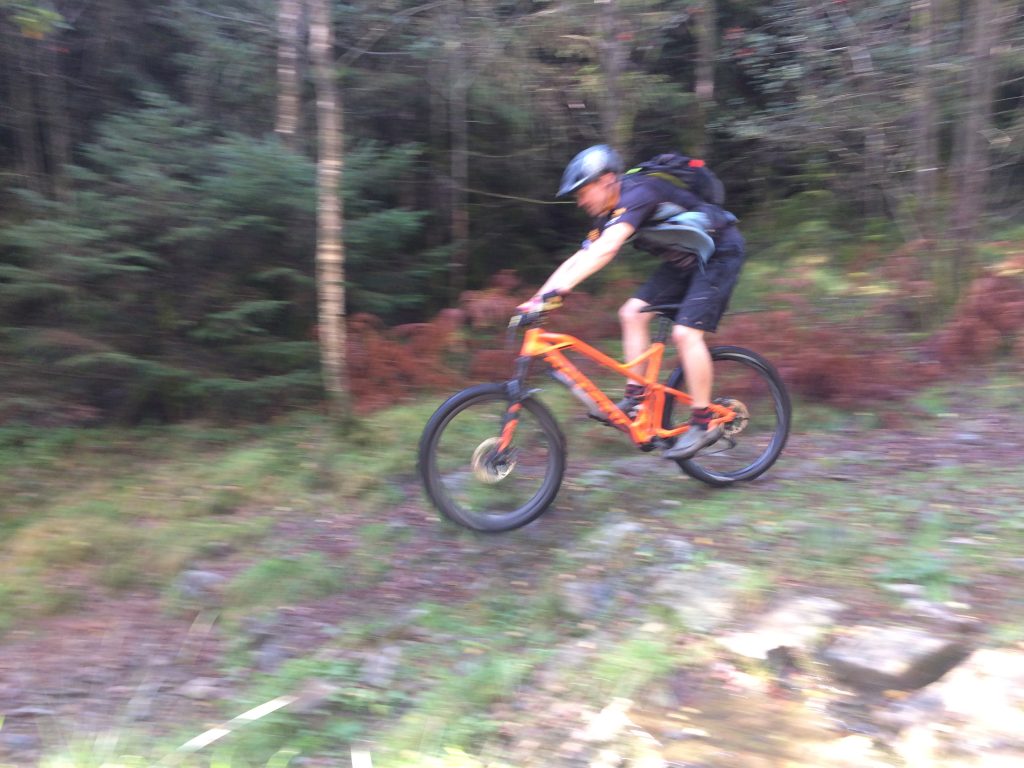 Speaking of bolts, the first ride saw both shock bolts come loose, the top almost falling out! Some Loctite seemed to sort it but after the Lakes I found the top shock bolt was again half a turn loose. Typical Mondraker rear end then.

The BB height doesn’t feel high when riding and cornering. Indeed I still had a few pedal strikes and the marks on the ends of my crank arms suggest any lower would be ill-advised.

With the 29er wheels the bike picks up speed lovely and quickly, and wants to keep it. I’m not as fast as the bike wants to go! On a number of occasions I was hitting stuff I wasn’t comfortable hitting at the speed I was, but fair play to the bike, it saved by butt every time. Line choice wasn’t always fully in my control, whether due to the head angle or the length, I didn’t always feel I was 100% in charge of the ship, so to speak.

The shock tune is something I feel needs work. The Monarch Plus is not a debonair but it doesn’t need it. The initial shock movement is plush and easy. I ended up with 28% sag in the rear, which after a week in the Lakes felt the best compromise. Pedal induced bob is quite noticeable and on rocky, technical climbs if the shock is left full open it collapses in holes or on ledges and causes the bike to stall. The mid-position helps somewhat, but not as much as I’d like. I ended up riding with the rear “locked out” on most climbs, even the really rocky ones. Its not a full lock and the bike sat much better and climbed more like I’d hope. Descending the fully open left me feeling unsupported and once I accidentally left the shock on full lock for a quite long gnarly descent and it felt pretty good. The middle mode on most descents worked best, only really needing fully open for still big rock gardens. Some tuning should help, remember I’m not the average rider that the shock is tuned for. I’m a big lad and I don’t spin roadie circles. 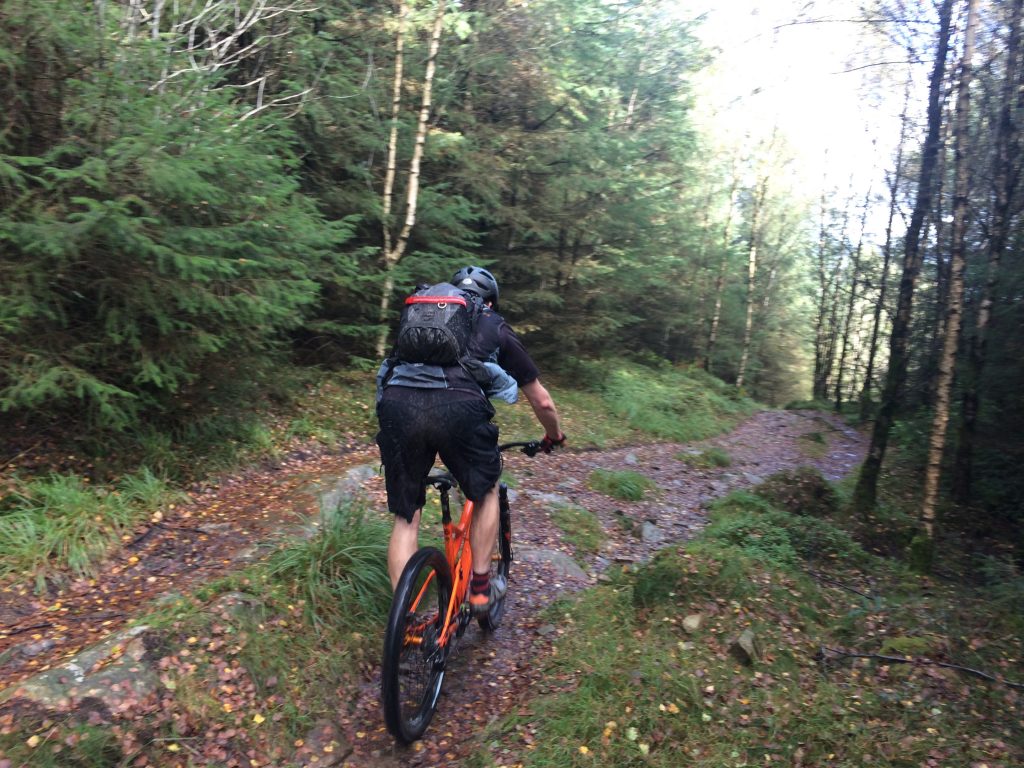 So, where from here? Well, first things first I’ll need to sort that chain stay slap out and see if I can add some protection on the lower brace. The shock needs some tuning (the Yari BTW was ace. Nice and stiff and the damping was never an issue. Felt pretty much like my old Pike to be honest) which will be the biggest thing. Will I fit the 2deg slackset thats already on my workbench? I don’t know. I’ll ride some more locally first I think before I decide. If I lived in the Lakes I’d fit it in a heartbeat, but I don’t, so its not so clear cut.