I’ve been off the Crafty for a couple of months, not ‘cos I didn’t want to ride it but because of had a small coming together with the ground whilst riding my hardtail on a local XC trail. Result, one broken humerus. Nothing funny about that, let me assure you.

Whilst I was off the bike I lent it to a friend who wanted to try it out. We seemed to like it, so much so I believe he’s buying his own. Nice.

Anyway, you are here because of the ass in the post’s title, so let me get to that. Last weekend I thought it would be good to get back out on the bike, so I headed to the Forest of Dean for an uplift with a couple of mates. Much good times were had and general larking about on bikes. Just how things should be. Back home after washing the Crafty, I noted that the backend was waggling a bit more than it used to. Its always had a slight knock from new, but this was a bike more. Some poking of fingers into gaps whilst waggling the back wheel showed the lower link was knocking. The lower link that sits in the spray of the rear wheel, in a British winter.

Now usually I’d just have popped out the bearings and sorted it then and there, but I didn’t have any 6901 bearings to hand and I had an uplift at Bikepark Wales booked on the Thursday. So I rode it with a loose backend. Post BPW the waggle was now very noticeable, so time for a strip down. Its easy to do, pop out the shock, take out the collet bolts and then unscrew the pivots. There are washers each side of the rocker, between it and the frame. Don’t loose those under the fridge.

With the rocker out it was immediately apparent the bearings were shot. They centre races rocked in my fingers. After drifting the bearings out (and emptying out the water from between the bearings) I popped the seals out to find water and mud, no grease! 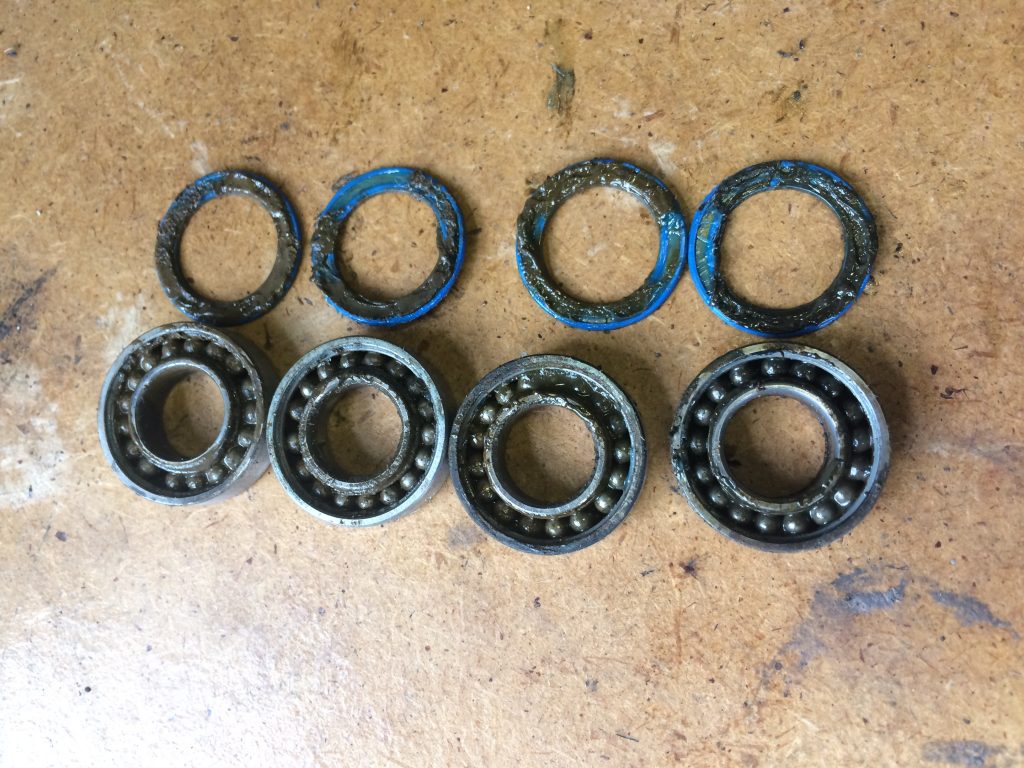 As you can see, 4 months of riding (not actually that much riding since I’ve been broken) has well and truly seen off the bearings. I have new ones on the way and I’ll have to see if I can make some kind of mud guard for the lower rocker or else I can’t see new bearings lasting much longer than the originals.

More soon, with maybe some photos (I got excited and forgot to take any as I stripped the pivots).