Since I first had the Crafty, the rear end has been, shall we say, lose. Its the most side to side flex of any bike I’ve ever owned, plus, if you pull its a bit more, it clunked. The shock mount bolts would also come lose after a ride or two, even when Loctite was applied. Apparently this is “normal” for a Mondraker if you ask around. Hmm.

The lower pivot bearings, as you may know, don’t last all that long either. I happened to bump into Chris Porter at Bikepark Wales one day, he’s a man with a lot of Mondraker experience, and he asked if I got more than 20hours out of a set of lower bearings. Pretty much thats what I get. Apparently this is “normal” for a Mondraker.

I was doing a lower pivot bearing replacement again the other week and I figured that it was likely about time to replace the top rocker bearings too, as they were starting to feel a little rough. One of the seat stay pivot bolts was seized from new so I drilled that out (Silverfish had sent me a replacement) and replaced all four bearings in the top rocker, which was fairly easy. Do just mind that your bearing press/pull tool clears the hole, mine just didn’t so needed some finagling.

The lower pivot is as simple as ever. Bish bosh bash and the bearings are swapped. On reassembling this time though, I took a little more care, since it was the first time I’d ha the backend completely off. I assembled every dry and only just snug to make sure everything was in line. It wasn’t. Well I suppose it was inline but I noticed that the rear of the lower pivot wasn’t snugging up at all. The pivot bolt at the front of the lower pivot closes up the two front frame “struts” nicely, but the rear is much stiffer because of the way the rear triangle is made, in fact it doesn’t pinch in at all. With everything dry assembled and snug there was a 2mm gap between the bearing cap and the frame on the drive side.

I took everything apart again and assembled it all with grease on the shafts and loctite on the threads, apart from the rear lower pivot bolt which I left out. Still a 2mm gap between bearing cap and frame. Hunting about the workshop I fashioned a shim to fit in and assembled the pivot bolt. With the shock out the rear pivoted smoothly up and down and the shock mounts were pretty much perfectly in line throughout the stroke (which if you own a Banshee, you’ll be highly jealous of ;)). Shock back in, wheels on and well well, the backend was much less flexy and no longer clunked. 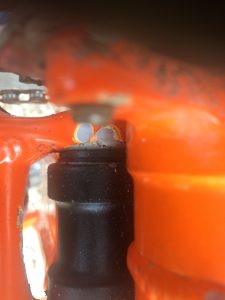 After an hour or so riding locally all seemed much happier, much less flexy when pedalling and tracking much more nicely too. Back home I found some 2mm nylon spacers on eBay to replace my bodged shim. i’ve been riding the bike now for a few week, with a couple of trips to the bike park, the Quantocks and everything in between. The shock bolts are still tight and there is no noticeable bearing slop in the lower pivot (and by now I’d usually have had to snug the shock bolts after every ride). I’m very happy.

Now I shouldn’t have to be shimming the pivot, Mondraker should have built things better and to tolerance initially, but for 2quid on eBay for 20 spacers (they’ll wear, so I bought a few spares) its a nice fix.